Last night…err this morning, we finally arrived from Atitlan to Lanquin. It was quite a journey. It was an 18 hour day to travel 200 and something kilometers; about a 7 hour expected trip.

Earlier that morning, our hour-late and fully packed shuttle pulled out from San Pedro around 9:30am, and wound its way up the bumpy switchback road, as Lake Atitlan got smaller behind and below us. The views of it became less frequent, then nonexistent, as our ground tranport and the Sun both rose higher into the soft blue, tropical sky. And let us not forget the shuttle driver behind us that would honk about every minute for the hour-long journey to the pavement, instead of passing us. We definitely had the little red shuttle van maxxed out up the steep incline towards the 4-lane asphalt and more level cruising terrain. Finally, the shuttle made it to pavement, and our pace and comfort were greatly improved.

We headed to Antiqua for our shuttle connection to Lanquin via Guatemala City. Our planned one hour layover turned into more like 2 hours, even after arriving nearly an hour late. After loading and boarding the new shuttle, we drove around the bumpy cobblestone streets of Antiqua picking up passengers for another small eternity. Alas, we were on smooth pavement heading towards Guatemala City at 100 kilometers per hour! 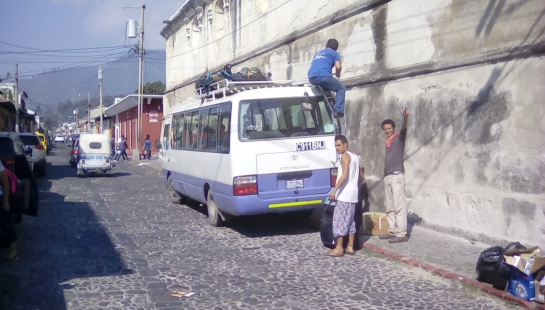 Upon arriving at the western edge of The City, we pulled into a Shell station to completely swap passengers and gear with another waiting shuttle. This was quite the process, and took the better part of an hour. I went into the station and got a tallboy of cheap beer for the equivalent of 50 US cents.

All loaded up, we moved deeper into the sprawling Metropolis for about 15 whole minutes. Then we pulled into the parking lot of a huge McDonald’s to meet up with Pedro’s mother, who had a slow cooker for our project’s camp kitchen. And then the driver got a call that someone was coming from Antiqua by car, that had missed the shuttle there. While we waited, the driver tightened the lugnuts of the rear wheel. I was glad because I had noticed some disconcerting noises while sitting near that wheel, and we had a long way to go. I was sitting inside the shuttle, watching the driver work, when 3 westerners, with their own-the-world attitudes, tried to squeeze between him and the car in the adjacent spot. I said to them, “please let the man work, our safety depends upon it.” They looked at me in disgust because of the “inconvenience”, and then walked around other side of the adjacent car for entry to the front of the shuttle. Still waiting, I hopped out of the rear window of the shuttle to have a look around. I scanned the area for food vendors; I don’t do McD’s. With no street vendors in sight, I crossed a nearby walking bridge over the busy 6-lane divided main thoroughfare, and bought a cheap pizza and another local cheap beer. I stashed the cold beer in my inside pocket. I brought the pizza back to share. I just had to give Ronny McD, who happened to be permanently sitting on a bench in the parking lot corner, a bite of pizza too. 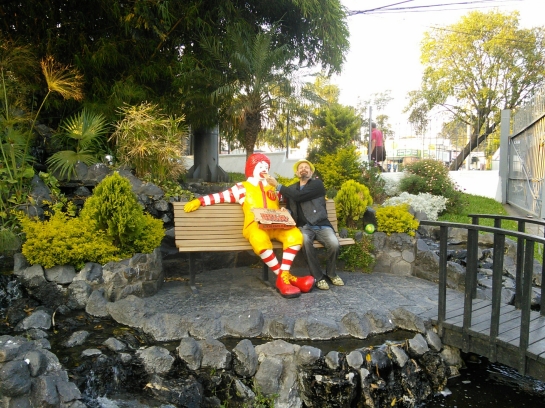 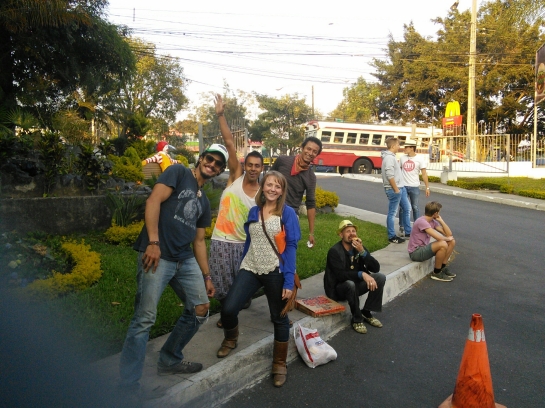 A group of us shared pizza and spliffs as parking lot security recorded the licence numbers of all the vehicles in the parking lot. Finally, all missions completed. All system go!

We passed through The City at a good pace. I saw art and life whiz by us at about 70 kilometers per hour, up and down the rolling terrain that held up the manmade construct of The City, as well as containing underground its guts of power, water, oil and gas, and of course..the sewage; all on top of unknown, ages old relics of an ancient Mayan past. Lots of street art, some civic art, and commercial art dotted the cityscape. The City reminded me of other international cities. Oakland, CA came to mind many times, as did San Jose, Costa Rica, Bangkok, Thailand, Chicago,USA, and others. The people were from all walks of life, wearing suites and ties, denim and flannel, sundresses and traditional Mayan clothing. Vendors, service workers, and business men and women most likely climbing through middle management for the corporate machine all around us, all packed the sidewalks, tuk tuks, taxis, old and modern cars, and city buses. Of course among them too, were artists, dreamers, inventors, tradesmen, farmers, students, doctors and lawyers, professors and politicians, and the occasional group of tourists. Lots of motorcycle riders too, obviously a good choice in this busy city where gasoline and diesel hovers around US$7.50 per gallon.
In due time, the high rises, other edifices, and shack homes gave way to gaps of jungle and rolling hills as the sun set red in the clouds to the west, and in the wake of our stutter start shuttle ride.
With nightfall and nothing much to see, coupled with my gizmo batteries dead or dying, and the slow journey of the daytime behind us, and 5 more hours of dark road ahead, I fell in and out of different states of consciousness. At some point just after dark, at the far east end of The City, we made another stop to drop off passengers, whose luggage was buried by of all the other luggage. I’m pretty sure it was the same shortsighted folks who tried to push there way past the driver trying to tighten lug nuts earlier in the day. Alas, about 11 hours after our scheduled boarding time, we were in route to our final destination. Later, with about 2 hours to go, we stopped for food and bathrooms one more time. It was purposely a quick and uneventful stop. We reboarded and moved down the jungle road, and through the night.
The shuttle slowed, and my senses returned to my physical reality. We made a sharp right hand turn, almost a u-turn, onto an unpaved, bumpy road. The lack of cushioning from the shock absorbers was a testament to the number of times the trusty shuttle had made the trip before. My weary mind wandered to the condition of the tires and brakes, and the driver, who had stayed at the helm for so long. I had mad respect I had for him at this point. Onward we ploughed until we made it to the town of Lanquin, where we offloaded all passengers and luggage.
While sitting in the back of the nearly empty shuttle with my window open, a group of locals hawked their tuk tuk rides, hostel rooms, and jungle tours to the freshly disembarked passengers at a couple strokes past midnight. A young man, who looked like he had not missed a meal his entire life, noticed my pizza box and approached my window, and in a perfect, intentionally sarcastic American accent said, ” Uh excuse me, sir. You know we take pizza donations and we will gladly take that box and get rid of it for you.” The comic relief was welcome. I rewarded him with a laugh and the pizza box with a couple pieces still inside it.
Our host driver was there to meet us. A short few minutes later we were at our destination just outside of town. It was a comfortable domicile with the sound of running water all around us. Our group of 6 or 7 wound down, with flower tea, chatter, and laughter, as we all prepped ourselves for bed. A little past 1am, my head was on the pillow, and my body was horizontal on a queen size bed. I woke briefly before dawn to the sound of rain and the smell of lush, wet jungle. One REM cycle later, I was wide awake just after dawn. The yard was beautiful and full of flowers. A large river, Rio Lanquin, flowed 30 meters from my window. I grabbed my yoga mat and went outside. The light yet steady rain prevented yoga on the lawn. But yoga on the the covered porch was more than acceptable.

My body welcomed the yoga as the clouds moved away to make room for sunshine. Some others awoke while I practiced with a view of the garden and Rio Lanquin. Along with the sounds of muted chatter from inside, I could smell the coffee brewing and eggs cooking, as I wrapped up my morning practice with a timed 5 minute meditation. I was invigorated and excited for the days ahead.

Although this tale of 24 hours from the road may seem as though it was an arduous, painful journey, at times it could have been. But, in actuality, it was a pleasant trip full of sights, sounds, smells, conversations, meditations, and laughter. This is traveling. This is seeing the world. This is experiencing the world, tasting it and the many flavors of humanity with a smile.